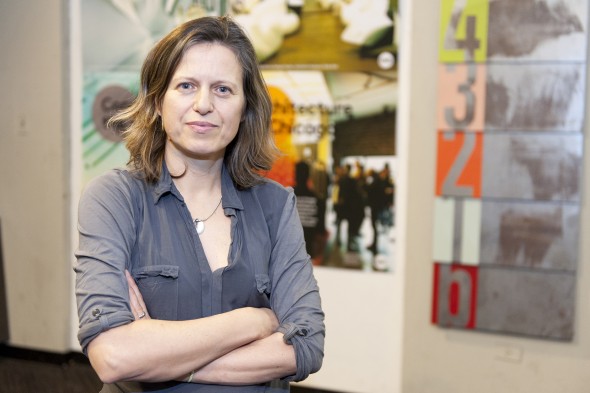 Architecture faculty member Clare Lyster narrates the documentary “We Built This City: Chicago,” which focuses on the role of Irish labor in the city’s development. — Photo: Roberta Dupuis-Devlin

The “We” in the film “We Built This City: Chicago” refers to Irish immigrants, says Clare Lyster, who is one herself.

The Irish government in 2015 profiled Irish design firms at home and abroad. One of the many initiatives included installations from 10 Irish architectural firms, four exhibited in London, two in Shenzhen, China, and four in Chicago.

Work from the latter is on view through Sunday at a government-backed exhibit at the Chicago Design Museum, “New Horizon: Architecture from Ireland.”

The documentary about Chicago’s development is part of another Irish Design 2015 initiative and is one of three focusing on the role of Irish labor; the others are set in London and New York. All were produced by Dublin filmmakers Bonnie Dempsey and David O’Sullivan of Dyehouse Films in affiliation with the Irish Architecture Foundation.

“The movie is primarily about the Irish laborers on the Illinois & Michigan Canal, for 12 years starting in 1836,” Lyster said. Irish workers had moved on to Illinois after building New York’s Erie Canal. The canal joined Lake Erie to the Hudson River.

In turn, the I & M connected the Des Plaines River to the Chicago River, completing the grand linkage of the Atlantic Ocean to the Mississippi River. “Now you could go from New York to New Orleans through the interior of the country,” Lyster said.

The work had another significance: “The I & M was single-handedly responsible for the development of Chicago,” she said.

Construction halted temporarily when the project ran out of money. It picked up again when laborers were issued “land scrip.”

“You could get land in lieu of being paid,” she said. “That’s how a lot of Irish settled in the city instead of moving on.”

Lyster opens the 10-minute film, available online, at Canal Origins Park, at Cermak and Ashland, which commemorates the connection of the Great Lakes to the Mississippi drainage basin.

Bridgeport is north, across the Chicago River. “It’s the only part of the city aligned with the river as opposed to the Jeffersonian grid,” she said.

At the park she meets Kevin Harrington, professor emeritus of architectural history at IIT.

“The people who worked on this were digging through a swamp,” he tells her. “That meant that at least from their ankles to probably their chests they were in freezing cold water.”

Injuries, cholera and malaria took the lives of 5,600 laborers.

Next Lyster meets with historian Ellen Skerrett at Old St. Pat’s Church, Chicago’s oldest public building, to talk about the role of Irish Catholic women in starting hospitals and schools.

“This is what gave the children and grandchildren of immigrants a push up so that they could enter other areas of professionalism beyond politics,” Skerrett says.

Lyster moves on to novelist and historian Richard Lindberg, who notes that Thomas Dyer became Chicago’s first Irish mayor in 1856, followed by 11 men and one woman of Irish descent.

Lyster’s last interview for the film is with architect John Ronan, who happens to be her husband. Noting that Mies van der Rohe founded the architecture school at IIT, he says, “There’s a whole generation of Irish architects who came to IIT and then went back to Ireland and disseminated this sort of teaching.”

Lyster, whose academic focus is urbanism and infrastructure, has two books coming out — Learning from Logistics: How Emerging Networks Inform Cities, in February, and, with Daniel Ibanez, Charles Waldheim and Mason White, Third Coast Atlas, about planning in the Great Lakes, due next summer.

She grew up in the town of Mullingar, Ireland, and earned a bachelor’s degree at University College Dublin. She moved to New York City in 1996, received a master’s degree at Yale, and landed at UIC in 2001.

She and Ronan live in Streeterville with their two daughters, Evelyn, 9, and Adrienne, 4.

“What I love most about architecture is that it allows you to critically think about space and society, and that through design the architect has the agency to really impact and/or change how people live and work in the world,” Lyster said.