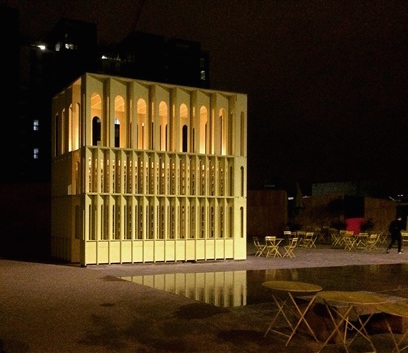 A Bernard Tschumi-esque pavilion designed by TAKA, Clancy Moore, and Steve Larkinhave and a yellow kit-of-parts pop-up by Hall McKnight have been unveiled at the London Festival of Architecture (LFA)

The two structures, part of a wider programme to showcase Irish architecture, will sit on Cubitt Square in Argent’s King’s Cross development throughout June.

Hall McKnight’s ‘yellow pavilion’ has been assembled from a kit of parts and contains an installation of bricks reclaimed from a terrace street in Belfast.

According to the practice, the project ‘explores how the phenomenon of the city is assembled from individual pieces’.

At the opposite end of the square sits the ‘red pavilion’ designed by TAKA, Clancy Moore Architects and Steve Larkin Architects, which features an elevated walkway beneath a large overhanging roof.