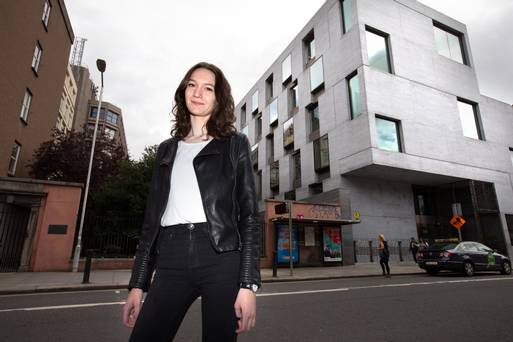 Sometimes you need a young one to tell you what’s happening in the world. Rachel Gallagher is a 25- year-old architect who is Dublin-based and working for Irish Design 2015, and so has her finger on the pulse of how our capital is shaping up.

“We are entering the era of sharing, as apps or websites like Uber and Airbnb are becoming more popular,” Rachel says. “Schemes like Dublin Bikes are brilliant but we have to design our city to accommodate them.”

The UCD graduate with the head of loose ringlets grew up in Roscommon. “If you design the roads for cars, you’ll get more cars – it’s still very dangerous to cycle in Dublin. Architecture also plays a role in giving us spaces where we can share experiences, like watching a movie together under Sean Harrington’s umbrellas on Meeting House Square,” she says.

Currently a renter in the Liberties, Rachel’s interest in architecture was fostered when she was a child and her mum and dad – dad is a carpenter – bought a small deconsecrated Protestant church outside of Boyle and converted it into an open-plan residence.

“We lived in Queens in New York where I was born until I was five, and they converted the church when we moved home to Roscommon,” Rachel says. “It gave me a view into what could be done with space and how it could be changed around.

“And once you know a little about architecture, you want to know more,” she says.

Rachel is of the generation of architects who grew up in the boom years and spent the bust ones in college, and are now finding a place for themselves in the changing landscape that is Irish architecture.

The role of the architect is now less restrictive, she says. “Architect graduates have always travelled and worked in places like Berlin, New York and Hong Kong. There is work here now if they want to stay, but the role of an architect is less defined these days.”

She works as a curator with the Irish Architecture Foundation, a not-for-profit organisation whose aim it is to communicate architecture to the public. She’s also deeply involved in Irish Design 2015 (ID2015), the year-long initiative to promote Irish design of all kinds internationally, which aims to create jobs and grow exports.

New Horizon-architecture from Ireland is the flagship architecture show with Irish Design 2015, and the work of 10 Irish architecture practices are being presented in three cities – London, Chicago and Shenzhen.

“The practises have been selected by curators Nathalie Weadick and Raymund Ryan, and we’ve already been to London,” Rachel says. “The London Festival of Architecture choose Ireland as its inaugural Focus Country, and two pavilions, one red and one yellow, were created in the Public Realm in King’s Cross, and an installation called Nine Lives at the Design Museum,” she says. “It was very exciting, and there was a real sense that all eyes were on Irish architects.”

A lot less cranes fill Dublin’s skyline these days, yet interesting architectural projects are going on. Rachel points to the pop-up garden Granby Park, which turned a derelict site on Dominick Street Lower into a garden with outdoor performance spaces for locals.

“Some of my favourite architects have been testing new ideas on smaller projects,” she says. “Projects such as Granby Park have changed the way we think about public space in Dublin and I would love to see permanent spaces like this.”

So what changes can we expect on the architectural front in this new era of sharing?

“Quintessential meeting places in Ireland are dwindling such as the pub and the post office,” Rachel says. “We have to create new building types for people to socialise in our towns and cities, so they can feel part of a community. We need to create buildings which are good for the soul,” she says.