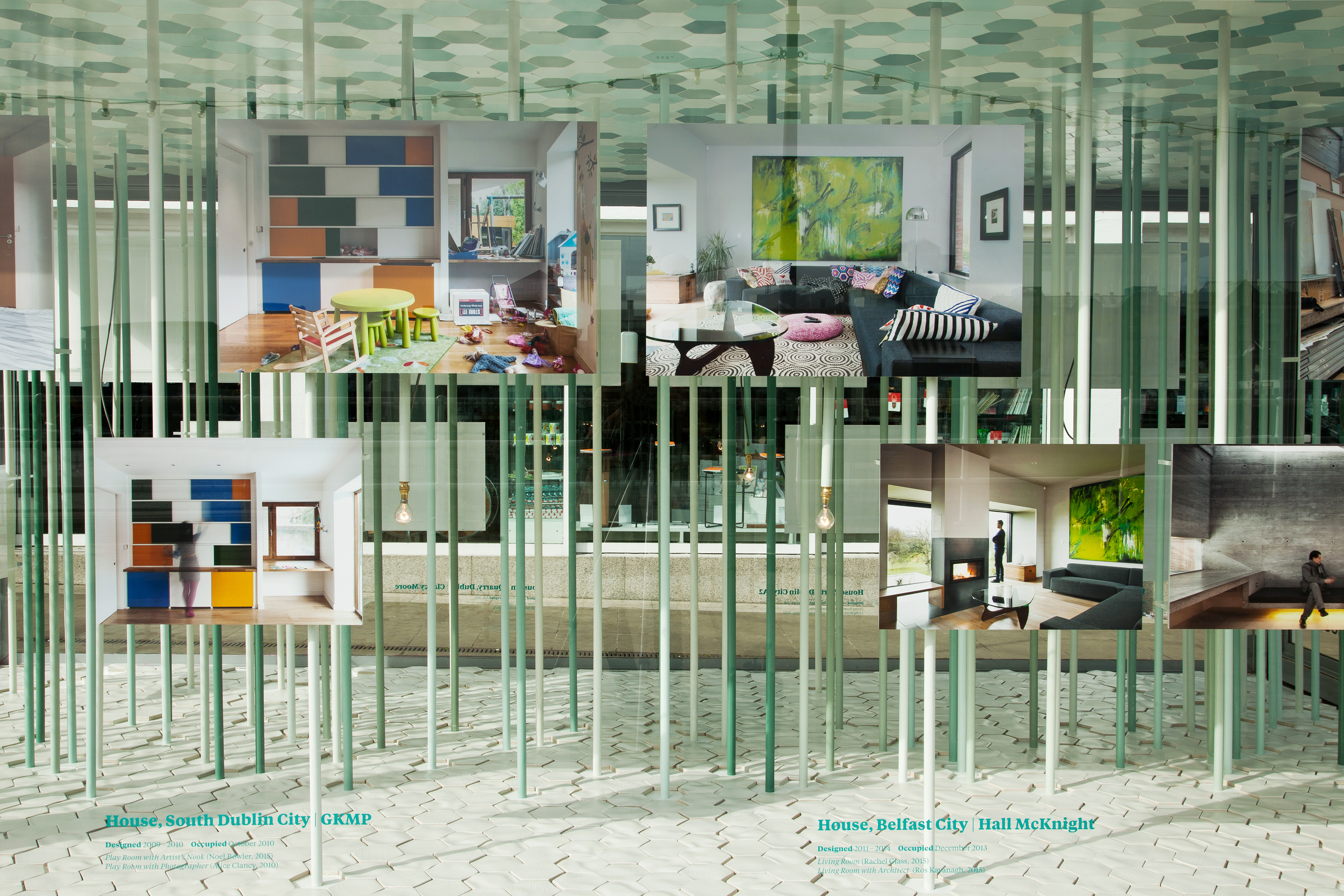 Architecture festivals, biennales, triennials and design weeks are often at their best when they have a distinct focus, a singular point of convergence on which to draw out insights and ideas. Although each year there’s a new theme, the London Festival of Architecture could be accused of being too broad, an umbrella term for various events already taking place in the city. It is with some relief that this year, for the first time in its 11-year history, LFA singled out one country – Ireland – as its focus country.

As part of Irish Design 2015, a year-long international celebration, Ireland presented the work of five young practices in the form of three colourful and collaborative installations across the capital. This showcase, titled New Horizon_ architecture from Ireland, and curated by Nathalie Weadick and Raymund Ryan, championed a new wave of emerging Irish architects, all characterised by similar social concerns and a willingness to collaborate within and across disciplines.

The exhibition takes its inspiration from a group of eight internationally renowned Irish architecture practices, including O’Donnell and Tuomey, Grafton Architects and Heneghan Peng Architects, which collaborated as Group 91 to win the masterplan competition for Temple Bar in 1991.

This younger generation, born after the Seventies and educated during the days of the Celtic Tiger, have similarly all found resourceful ways to weather the economic downturn. Dublin-based architect Emmett Scanlon presented Nine Lives, an exhibition of nine rooms designed by nine Irish architects, in the glass tank in front of London’s Design Museum.

All too often photos of new buildings, especially residential projects, are devoid of life, unoccupied by people or the clutter of everyday life. This refreshing exhibition, however, showed rooms as they are in real life, in flux and ever-changing, complete with tangled wires, ugly televisions and children’s toys strewn across the floor.

‘Nine Lives proposes that homes are in fact made by design and through use, by production and consumption – both creative processes – are different but equal,’ says Scanlon. ‘These stories – containing people’s ideas, needs and dreams of how to work, dwell or play – continue to develop through occupation and use.’ As such, Nine Lives was an original response to the Festival’s theme Work in Progress, illustrating that buildings aren’t finished simply once they’ve been built but are an ongoing story.

The exhibition also touched on the ongoing story of Ireland’s housing crisis – each of the 90 poles displayed in the Tank represented the 90,000 housing units needed by the year 2020, a daunting task for the small group of 2,478 registered architects in Ireland. This may have been a small exhibition, easily missed on the Festival trail, but it had the potential to spark wider debates and discussions about the future of Irish architecture.

Aside from the scattered park benches already in the square, it provided a much-needed place to gather and meet. ‘We wanted to make a collective statement about “the city” and civic architecture. We believe the city needs multiple voices for vitality,’ explains Alice Casey and Cian Deegan, of TAKA Architects.

The Yellow pavilion was a more intimate space, made up of a series of sheet-timber arches and created by Belfast practice Hall McKnight Architects. Inside, the project presented 1,000 reclaimed Belfast bricks, some of them selected and modified by students from the University of Ulster.

‘Our project recognises the city as an open project – alive, ongoing. The pavilion is a vehicle to carry a collection of bricks that speaks of the city as a work in progress,’ say Alastair Hall and Ian McKnight of Hall McKnight, ‘Bricks seem to absorb and hold memories — like little citizens of construction… occupying both the old city and expecting the new one.’

Just as these portray the city as a work in progress, so this initiative too is an ongoing story. In October the work of three other practices (A2, Ryan Kennihan and GKMP) will show at Chicago’s first Architecture Biennial, while in December, Urban Agency and AP+E will create an installation for the sixth Shenzhen Hong Kong Bi-City Biennale of Urbanism\Architecture. These objects may only be around temporarily, but Ireland’s voice will continue to be heard long after they’re gone.

The Brutalist Playground, Architecture Gallery at RIBA, London, Until 16 August

From the Balfron Tower and the Barbican, to Park Hill and Robin Hood Gardens, Britain’s love-them-or-hate-them post-war housing estates are familiar to us all. A lesser-known aspect of their history though is their playgrounds – abstract and surreal designs, cast in sculptural concrete forms, that in the most part no longer exist. Deemed unsuitable for children’s play, they were just another failure to add to brutalism’s long list. Now, a new installation in the RIBA’s Architecture Gallery by Turner Prize-nominated, architecture collective-of-the-moment Assemble, and artist Simon Terrill, aims to shed light on this overlooked and largely demolished slice of architectural history.

Assemble and Terrill trawled the RIBA’s archive to create an immersive, pastel-shaded, foam landscape that draws inspiration from elements of three London estates: Churchill Gardens Estate in Pimlico (Powell and Moya), the Brunel Estate in Paddington (City of Westminster Architect’s Department) and the Brownfield Estate in Poplar (the home of Erno Goldfinger’s Balfron Tower).

A turquoise flying saucer from Churchill Gardens sharply inclines off the ground, while a thin wedge of a slide mimics the one at Balfron Tower, and honeycomb building blocks scatter across the floor. It all looks like hard colourful concrete, but The Brutalist Playground encourages audiences (adults and children alike) to scramble around on these soft surfaces and, well, simply, play. Other curators should take note – it’s a welcome alternative to static displays and reproduced archival material.

It’s certainly a new approach for the RIBA, one that was perhaps inspired by the success of the 1:1 installations at the Royal Academy’s popular 2014 exhibition Sensing Spaces. ‘I think that it’s a way to shake up those who ascribe lots of importance to a theoretical or historical approach to architectural discourse,’ says Assemble’s Jane Hall.

It invites people to engage in a more intuitive, exploratory way, which for some could be quite challenging,’ Her colleague, Joe Halligan, sees it as a more ‘art-based approach’ that raises questions, particularly about the value of these brutalist playgrounds in use today, rather than posing solutions.

Adds Hall: ‘We would look at the photographs of these playgrounds and ask “How was someone supposed to play on that?”. It’s not prescribed, and that was the big unknown about this exhibition – how are people going to inhabit the space?’

With The Brutalist Playground, Assemble and Terrill are also commenting on the element of risk — these concrete playspaces were conceived before liability and risk came to dominate our public spaces, and concrete could never be used for a playground today. The soft reconstituted foam makes these strange shapes seem even more surreal. Says Halligan: ‘For me, one of the interesting things about these playgrounds is that they can be seen as “condensed brutalism” or something. It’s a free architecture without constraints. You can see the fun that the architect was having making these amazing structures.’

Indeed, these brutalist playspaces can be seen as a symbol of the optimism in which these architects proposed to reconstruct the post-war city. They could teach us all to be a little bit more playful.